SEABUCKTHORN – COULD THIS BE THE NEW MIRACLE BERRY? 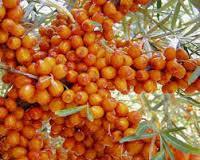 At WILDHEART [wellbeing] we highly recommend supplementing your diet daily with Mongolian Seabuckthorn Oil for better health in general, and for better skin health in particular.  Seabuckthorn Oil has been used in eastern medicine for centuries as it may assist in restoring skin tissue and its elasticity, malnourished + dehydrated skin, hypersensitive skin conditions and can assist skin dryness.

Mongolian Seabuckthorn is unique for its ability to combine oil-soluble and water-soluble Vitamin A and Vitamin C.  It contains over 190 nutrients and phytonutrients, including Vitamin C which is 12 times higher than that of an orange.  It also contains unsaturated fatty acids, high amounts of vitamins, minerals, fibre and protein making it a powerful superfood. This berry also has as much Vitamin E as wheatgerm, three times more Vitamin A than carrots, and four times more Super Oxide Dismutase (SOD) an important enzyme that helps prevent free radical damage, than ginseng. Plus, it’s the only plant source that contains Omega 3, 6, 9, and 7 and trace elements such as copper, iron, selenium and manganese. Palmitoleic acid, also known as Omega 7, is a rare omega fatty acid gaining research momentum in the health and beauty scene. Omega 7 is known for supporting healthy hair, skin, and nails, as well as providing various health benefits for the gastrointestinal tract, immune system, and cardiovascular sysem. It is only known to exist in a couple plant sources and to a very small extent in fish oils. Seabuckthorn is the most potent source of Omega 7 fatty acids known and most research on Omega 7’s has been conducted using Seabuckthorn.  A special feature is the golden/orange colour of the soft gel capsules which is due to the naturally occurring pro-Vitamin A.

It is best applied topically at night for two reasons.  Firstly, due to the natural pigment of the berry and oil, it can appear slightly orange on the skin.  Plus Vitamin A can be sun sensitive. However, it will absorb well overnight and your skin will be clear in the morning.